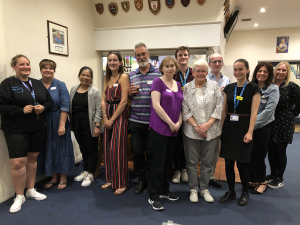 Some 25 people were at the Frimley Park Hospital IBD Patients Support Group meeting at Farnborough Rugby Club on Wednesday evening. The photograph includes Jayne Lifford, IBD Specialist Nurse and her IBD Team colleague, Arlyn Malanta and Matt Lear and Laura, both Gastroenterology Dietitians at the hospital, who came along to talk to the group.

Jayne said there were two new consultants in the IBD Team and they were looking at recruiting an additional nurse mainly to be responsible for the 400 patients now receiving treatment by infusion. The hospital is also working with local GPs who see the Support Group as an essential element of dealing with the mental health aspects of living with the disease.

Frimley Park Hospital’s new computer system (EPIC) goes live on 11 June. This will combine several current systems so all of a patient’s record can be seen at the same time. It is also planned that patients will be allowed direct access to, for example, test results.

The main topic was Nutrition and IBD. In the past, it was rare for IBD patients to have direct access to dietary advice but now they hope to give newly diagnosed patients such advice as early as possible. Matt and Laura  work closely with inpatients on F9 the Gastroenterology Ward. Dietary and Nutritional advice is now seen as part of normal treatment.

Both Matt and Laura  agreed that Nutrition  is such a wide-ranging topic and each individual has different tolerances/allergies. There was no “one-size fits all” treatment. However, there was general agreement that fibre and spicy foods are probably best avoided especially when flaring. Salads, though seen as healthy, are not good for IBD patients especially in hot weather! As well as food, it is also important to maintain good levels of vitamins e.g. Iron and Vitamin D. The IBD team would initially recommend “to go white” in a flare. Rice, pasta, chicken and fish for example could help to reduce irritation. A FODMAP diet could help but it is complex and any serious dietary changes should be done with the guidance of the nutrition team.

After the general talk, there was plenty of time for general questions and individual discussions with the IBD Nurses and Dietitians.

The group will meet again on 7 September and the topic will be:  “Living with IBD”.

Back to Blog
Go to Top